According to CHRF, those numbers are unprecedented. Police estimated that the 338,000 people followed the protest’s original route.

In a statement released by the group Sunday night, CHRF said demonstrations will continue until the government withdraws the extradition bill in its entirety, releases arrested protesters and withdraws all charges, retracts the characterization of the protests as a « riot » and forces Chief Executive Carrie Lam to resign.

« Should the government refuse to respond, only more Hong Kongers will strike tomorrow, » CHRF said.

Joshua Wong, the young leader of Hong Kong’s 2014 “Umbrella” movement, will be released from prison on Monday, according to his pro-democracy political party Demosisto.

The news broke amid historic demonstrations against a China extradition bill Sunday night.

Wong, who spent much of 2017 in prison for his role in the protests and was sent back last month for contempt of court, has called for the scrapping of government proposals aimed at easing extradition of wanted suspects to mainland China.

In an opinion piece penned for Time magazine earlier this week, Wong said that Hong Kong’s extradition law would be a “victory for authoritarianism everywhere” and urged the United States to act.

“As American security and business interests are also jeopardized by possible extradition arrangements with China, I believe the time is ripe for Washington to re-evaluate the U.S.–Hong Kong Policy Act of 1992, which governs relations between the two places. I also urge Congress to consider the Hong Kong Human Rights and Democracy Act. The rest of the international community should make similar efforts,” Wong wrote.

“Do You Hear The People Sing?,” a song from musical Les Misérables and the anthem of Hong Kong protests in 2014, has resurfaced in demonstrations over the controversial China extradition bill.

A large group of demonstrators belted out the song in unison under a footbridge next to the police headquarters Sunday afternoon in Hong Kong. Crowds circling the singers cheered: « Encore! »

The rousing chorus: “Do you hear the people sing?/Singing the songs of angry men?/It is the music of the people/Who will not be slaves again!” is sung in the musical as students prepare to launch an anti-monarchist rebellion in the streets of Paris.

In recent years it has been picked up as the soundtrack for demonstrations from Ukraine to the US. 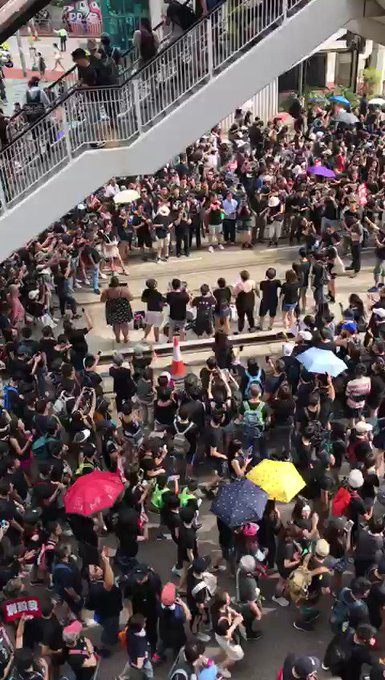 A large group of protesters was singing “Do you hear the people sing?” Sunday afternoon in Hong Kong. Tens of thousands of defiant citizens took to the streets calling for CE Carrie Lam to fully withdraw the controversial extradition bill. Video from CNN’s @danqtham