Protesters put out the tear gas as they pour water on it at Kwai Fong district, Hong Kong, on Aug. 11, 2019. (Anthony Kwan/Getty Images)
HK CURRENT AFFAIRS

In Hong Kong, Local Groups Condemn Another Round of Police Violence, Call for General Strikes

BY FRANK FANG, EPOCH TIMES
Hong Kong’s protesters are appalled after what they say was an excessive use of violence by police overnight on Aug. 12, with some groups calling for general strikes.

Thousands of pro-democracy Hongkongers held a peaceful rally in the city’s Victoria Park on the afternoon of Aug. 11, reiterating their demand that the government’s extradition bill be fully withdrawn. The bill received widespread backlash when the government tried to rush its amendments through the legislature in June, amid fears that the changes would make those passing through Hong Kong vulnerable to extradition and trial in China’s courts—notorious for the absence of rule of law.

In the evening, protesters splintered into several fronts, adopting a flash-mob-style protest aimed at avoiding direct confrontation with police. At several districts, including Tsim Sha Tsui and Wan Chai, police fired tear to disperse the crowds.

At Tsim Sha Tsui, one female protester was shot in the right eye with a police’s bean bag round, which penetrated through her goggles. Images of her bleeding heavily have now been shared widely on social media.

HK Riot Police fired bullet and headshot a young lady. I am not sure whether her right eye will turn blind or not but it is totally insane and terrible. US should not export tear gas and rubber bullet to HK Police anymore. 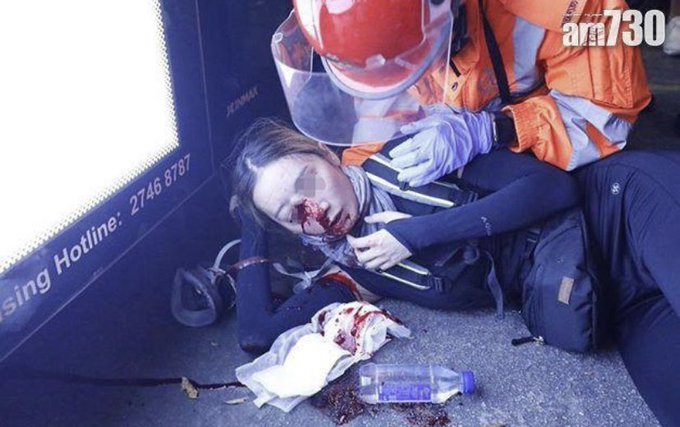 Inside a metro station in Kwai Fong, which is located in the New Territories, police charged at protesters and fired rubber bullets at point-blank range. Before the chaos unfolded, protesters had surrounded the nearby Kwai Chung Police Station. In response, police began firing tear gas to clear the crowd, and some protesters retaliated by throwing random objects and spraying water at police. Eventually, some protesters retreated inside the metro station where they were pursued by police.

Riot Police fired bullet to protestor in railway station within 1 meter. Can anyone tell me Riot Police are trying to murder or not? They are just protestors leaving the protest zone peacefully. 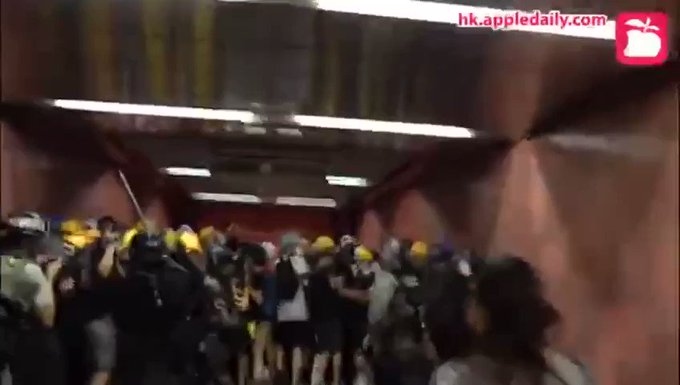 Joshua Wong, secretary-general of pro-democracy party Demosistō and the iconic figure from the 2014 Umbrella Movement, urged in a Twitter post that the world must not remain silent over the latest police violence.

“US must stop export any weapon to HK Police Force. Police in HK are using weapon from US to murder HKers,” Wong added.

Wong has repeatedly called on the U.S. government not to ship crowd control equipment to Hong Kong. He set up a White House petition for the shipment halt on July 5 and it has since garnered over 111,000 signatures. On July 29, he posted images on Twitter of tear gas canisters manufactured by a Pennsylvania-based company.

Aside from denouncing what happened to the female protester who was hit in the eye and the clashes inside Kwai Fong metro station, the Students’ Union also condemned police for firing pepper spray at close-range when they entered Tai Koo metro to disperse protesters.

The statement added that the police’s excessive use of power and violence was eroding the city’s rule of law.

The Students’ Union called on all Hongkongers to go on a strike for an indefinite period, as well as urging protests to continue to show up at the Hong Kong International Airport at 1 p.m. local time every day.

Thousands took part in a three-day sit-in at the arrival halls of the Hong Kong International Airport that ended on Aug. 11 in an effort to inform arriving passengers about the reason for the mass protests that are now entering their third month.

Resident-led group Parents United of Hong Kong also issued an online statement calling the police’s actions on Aug. 11 “cold-blooded violence.” The group also speculated that police would shed all responsibility for the violence by claiming that their actions were the result of “escalated behaviors” by the protesters, and questioned how long the police will continue to act this way or be held accountable for their actions.

A group of frontline medical professions in Hong Kong, in an online statement condemning police violence, stated that they will go on an indefinite strike beginning on Aug. 12, until the Hong Kong government answers to protesters’ demands.

The Hong Kong Journalists Association and the Hong Kong Press Photographers Association, in a joint statement on Aug. 11, condemned the police for failing to arrest people who had carried out attacks against journalists at North Point earlier on the same day.

“We express strong indignation against police officers at the scene for failing to stop and arrest those perpetrators,” the two associations stated.

The statement identified four separate attacks. In one incident, a reporter working for local media The Stand News was threatened before his tripod was snatched away. A reporter with local broadcaster RTHK was also attacked.

“We also sternly demand the HKPF [Hong Kong Police Force] to provide an explanation and conduct a thorough investigation, in order to send a clear message to society that no violence shall be tolerated and attacks towards journalists are a serious infringement of freedom of the press.”